Before You Turn the Page!

The thought of an intrauterine device, or IUD, is a big “turn-off” to many women with menstrual disorders. The very thought of using an IUD arouses strong emotions in many women–often because they’ve heard of troubling side-effects either online or from a family member or friend. There are several reasons for this that I will list below. Whether or not you choose to have an IUD is a personal decision. However, before rejecting the idea of an IUD you should learn more about the pros and cons of this important means to control heavy or irregular periods.

What kind of Intrauterine Device (IUD) can improve my menstrual period?

For the purposes of this article, we will discuss only IUDs which contain the synthetic long-acting progesterone hormone known as levonorgestrel (LNG). The levonorgestrel-containing IUDs are commercially available as Mirena™, Liletta™, Kyleena™, and Skyla™. In addition to their use as contraceptives, they are all useful for the management of abnormal uterine bleeding.

How do progestins work?

A progestin keeps the uterine lining from growing. If you can draw an analogy of the uterine lining (endometrium) to a grass lawn, a progestin is a chemical lawnmower—it doesn’t destroy or damage the uterine lining, it just keeps it very short. With the lining kept very short or “low”, menstrual bleeding can be either sharply reduced or stopped altogether. The effect is temporary and lasts only as long as the IUD remains inside the uterus. Once the progestin-containing IUD is removed your uterine lining will continue its normal cycle. 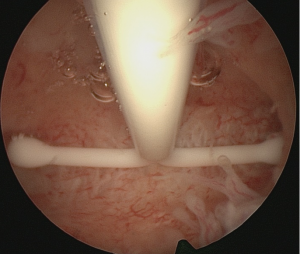 A levonorgestrel-containing IUD seen inside the uterus.

The ”cons” or the “downside” that you may be reading online or hearing from friends.

In my experience many women who might benefit from the IUD simply reject it because of one of the following reasons:

Let’s take a critical look at each of these concerns and address them one-by-one.

Many women have experienced painful IUD insertions or avoid IUDs entirely because of this fear. Women are rightfully concerned that their IUD insertion has, in the past, been a horrible experience or they are simply very worried that they will experience unmanageable pain during an insertion.

Unfortunately, it is common practice in the United States to not offer adequate pain control for IUD insertion. Many physicians utilize the so-called “paracervical block” which is a local anesthetic. Experience has shown that these anesthetics are insufficient in many if not most women. Instead, we have found that many women benefit from the availability and use of intravenous (I. V.) sedation and pain control. This is the kind of sedation that is often used for such procedures as colonoscopy or upper endoscopy. These medications are short-acting and allow the patient to sleep through the procedure without any discomfort from insertion whatsoever.

2. I worry about the IUD “migrating”.

In my experience, the only direction that IUDs “migrate” is out through the cervix and into the vagina. Occasionally the size or the configuration of a uterus will not allow an IUD to remain in the uterus. This can happen if there’s a uterine fibroid or a congenital anomaly called a septum. In such instances, the IUD is passed into the vagina and the woman knows it.

However, there are known cases in which the IUD has perforated through the uterus. However, it must be stressed that, in my experience, such perforations are caused by the physician at the time of the insertion and do not occur after the IUD has been placed in its proper location. Although uterine perforations at the time of insertion can occur the likelihood of such an occurrence is very, very small—especially if ultrasound guidance (Figure 1) is used during the insertion procedure. Without ultrasound guidance the IUD insertion is “blind” –a situation that increases the risk of an accidental perforation. 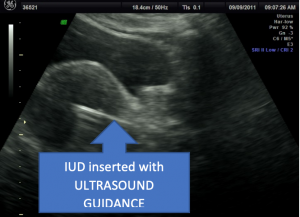 Without doubt there are cramps in the first day or two following an IUD is insertion—occasionally the cramps can last beyond that.  Most, but not all, cramps can be avoided by selecting a properly IUD size.

5. Amenorrhea (Your periods will stop).

About two-thirds of women with hormone-containing IUDs will stop having periods.  This is often a desirable effect.  Although this may seem “unnatural” it should be remembered that this effect lasts only as long as the IUD is in place.  Once the IUD is removed you will have the same menstrual pattern as you would have had without the IUD.  If the IUD was placed in order to control irregular or heavy periods, then its removal will generally cause your periods to return to the same pattern.  The amenorrhea is the effect that most, but  not all, women prefer to having heavy or irregular periods.

6. The idea of something inside me.

There is no question that for many women, the idea of a foreign body inside their uterus is disturbing.  One must consider the potential benefits of this non-surgical method against the alternatives which is often some form of surgery for controlling their abnormal periods. It is also worth remembering that an IUD is easily removed so that if you experience an uncomfortable sensation with an IUD you can always have it removed.

7. I didn’t do well on birth control pills so why should I try and hormone-containing IUD?

8. It can cause an ectopic pregnancy.

IUDs don’t cause ectopic pregnancies.  However, they also don’t protect against them.

While this is understandable it requires a more thoughtful approach.  It’s important to understand that your body makes many hormones and that not all hormones are the same—nor are most of them dangerous.  Most women are aware that their ovaries produce three types of hormones—estrogen, progesterone, and testosterone.

Of all three, it is estrogen that is the source of the greatest controversy.

Estrogen may, in some women, increase the risk of breast cancer, cardiovascular disease, strokes and deep vein thromboses (DVTs).  Estrogen may cause an increase in the frequency of headaches in women who are prone to them.

Testosterone is produced in small quantities in women and has a role in muscle development and libido.

What’s important to remember is the progesterone does not cause cancer and any of the effects associated with estrogen.  In fact, progesterone is safe for most women with a history of breast cancer, heart disease, a smoking history or those who’ve experienced deep vein thromboses.

This occasionally happens but, in our experience, is uncommon once the IUD has been verified (by ultrasound) to be properly situated in the uterus.  Keep in mind that the vast majority of women with IUDs don’t feel anything after a few days.

How we can improve your “IUD insertion experience”.

There are 2 important ways to improve your “IUD experience”.

The first is that we offer intravenous sedation.  Intravenous sedation is designed to last for a short period of time and the insertion a pain free experience.  Although physicians typically insert IUDs with local anesthesia, experience has shown that many women find this method of insertion to be intolerable—this is especially true for women who’ve never had a vaginal delivery.  Since some patients prefer light sedation while others want to be more deeply sedated, we should state that the sedation you choose can be varied according to your individual needs.

Following up on your IUD Insertion and why it’s important.

We recommend that following your IUD insertion that you are seen 2 weeks later for a follow-up ultrasound examination.  The ultrasound exam confirms whether or not the IUD is in its proper position.  Experience has shown that if the IUD is properly situated at the 2-week postop visit that there is 98% chance that it will remain in its proper position and is unlikely to be expelled.  IUD expulsions are not common but can often be predicted with 2-week post-insertion ultrasound. 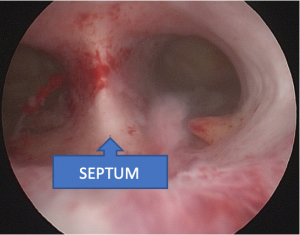 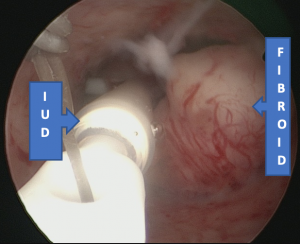 Figure 3. A view inside the uterus showing an IUD (on the left)
alongside a fibroid (on the right)

What benefits can I expect from the IUD?

When used all by itself, the IUD can produce dramatic benefits in about 75% of women. Most women with heavy or irregular periods become amenorrheic (stop having periods altogether). Others will still experience periods but notice a sharp reduction in the amount of menstrual flow. The remainder (25%) will experience inadequate relief and may require another form of therapy.

How long before I know if the IUD is working for me?

Generally speaking, you will know if the IUD is working within the first 60 days. It’s maximum effect typically requires 90 days although many women experience nearly complete relief in far less time.

Which women should avoid the IUD?

Although there are very few medical reasons to avoid a hormone-containing IUD, I have found that women with severe depression (not anxiety) often experience mood changes which they attribute to a hormone containing IUD.

Remember that the IUD is reversible.

One of the reasons for suggesting the use of a levonorgestrel-containing IUD is precisely because it is reversible. Unlike surgery an IUD can be “undone” – it can be removed. If a woman is experiencing unwanted side effects, it’s a simple matter to have it removed. Oftentimes a hormone containing IUD allows a woman to avoid surgery entirely.

So how do I know if a hormone (levonorgestrel) containing IUD is right for me?

The key to making the decision about an IUD is a thoughtful conversation with your health care provider. These discussions take time and should include your goals, priorities and other methods that may be available to you. But don’t dismiss the IUD because of something you might have read online or because of a friend or a relative had a bad experience. Every health care decision must be tailored to your physical and emotional needs.